The primary goal of the GSA’s First Impressions program is to improve the public’s perception and experience of federal buildings while removing clutter and streamlining security.

Fritz G. Lanham Federal Building, First Impressions Project, Fort Worth, TX
The Design Group was the Architect in the design-build team that completed the “First Impressions” lobby, entry, and first-floor restroom renovation at GSA’s regional headquarters in downtown Fort Worth. The project consisted of the replacement of the existing lobby ceiling, lighting, fire protection, and restrooms and includes two new security stations, new exterior and interior signage, and landscaping improvements.

As a “First Impressions” project, the project’s primary goal was to improve the public’s perception and experience of the building while removing clutter and streamlining security. The building is a particularly rigorous and minimal example of High Modernism, and its early 1960’s Modernist architectural elements are being carefully preserved and enhanced by the renovation. A primary element of the new design is a backlit, luminous aluminum grid ceiling throughout the lobby. The new ceiling replaces a low, 1970’s lay-in ceiling and directly references the building’s original luminous grid ceiling while also introducing a new level of detail and visual interest that both respects and enhances the pre-existing design.

Two new security stations, crafted of stainless steel and glass panels, will fit seamlessly with the existing architecture. The large, prominent mural facing the entry will be enhanced with improved lighting and protective features. The restrooms, formerly dreary and dated, will become clean, well-lit, and minimal, and a new drop-off station will provide convenient access to shipping and mail.

Despite its history, the building lobby had become cluttered and disorganized, and past alterations had removed many of the original design features. The goal of the renovation was to restore elements of the original design while adding new features that respect the spirit of the old. New elements include a new integrated security station, new skeleton wall clock (proposed in 1962 but never built), new wall paint in the original deep hues, improved lighting and signage, a new granite and walnut bench, new powered entry doors, integrated walk-off carpet in the vestibule, and an integrated building history display.

J.M. Jones Federal Building and Courthouse, First Impressions Project, Amarillo, TX
This jewel of a historic building was built in the 1930’s in the “Modernistic” style, incorporating elements of Art Deco and beautiful WPA murals depicting western life. The building had been insensitively modified over the years, and its historic entry doors, pendant lighting, and large glass transom had been lost. A large and obtrusive security counter had also been cobbled together from mismatched tables and cabinets, and it occupied most of the lobby.

The design-build project restores the glass transom and replicates the original aluminum entry doors, bringing natural light back into the lobby. It also creates an integrated wood, stone, and stainless steel security station that will accommodate the needs of guards while fitting in with the historic lobby. New pendant lights approximate the design of the original lights, and a large mirror replaces an existing infilled opening at the level of the historic murals. 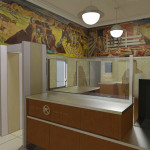 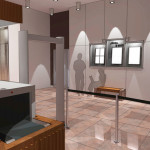 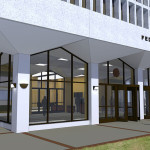 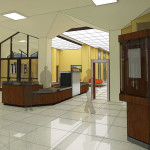