Coyote Willow Family School, located on a 15-acre site in Northwest Albuquerque, was built in response to overwhelming demand at its predecessor and prototype school, Desert Willow Family School. Situated in Northeast Albuquerque, the H+MDG designed Desert Willow is currently one of the highest performing schools in New Mexico, and as such, the school is in high demand. The school responded by reengaging the H+MDG team in an effort to recreate the same magic on the westside of Albuquerque.  The design team responded by not only meeting the school’s goals but surpassing them.

The program/curriculum at Coyote Willow Family School posed some interesting design quandaries when planning the new school. Coyote Willow features an exceptional and rare program that combines a half-day of classroom instruction with the remaining education occurring at home. This unique arrangement allows parents and caregivers a more active role in their children’s education. A large Multi-Purpose building was designed to not only host performances and events, but also act as educational space to guide parents along the education process and inform them of the exceptional opportunities the school provides. H+MDG worked closely with the school staff, parents, and students to create unique, personal touches throughout the campus.  For example, students were asked to create drawings that were reproduced on wall tiles for use throughout the school, as well as select the color palette to be used throughout the campus. The residentially scaled campus buildings were organized around a common courtyard containing multiple learning venues and activities. All teaching spaces are directly connected internally to the courtyard allowing for the absence of internal corridors. This approach also creates an efficiency in use of constructed space, allowing for circulation to happen outside under covered porticoes instead of inside in conditioned space. Each classroom has its own library, art supplies, sink, and printer and is daylighted with clerestories and skylights, eliminating the need for artificial lights on most days.

The design team forged a sense of ownership even before a single shovel was lifted by including the parents, students, and educators that would call Coyote Willow home. Also, by learning from the first campus’s day to day function, H+MDG was able to incorporate lessons learned to improve upon the design of this facility. 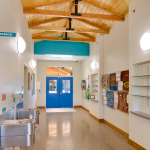 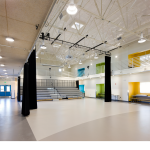 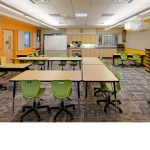 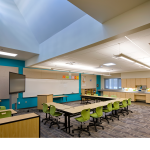 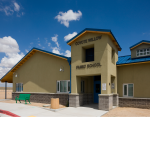